ITER is an experimental fusion reactor based on the “tokamak” concept. The estimated investment amounts of 15 Billion Euro (within 15 years) for this huge international research facility.

The objective is to show whether or not it will be possible, from the physical and technological point of view, to generate energy by nuclear fusion for real production of electrical energy.

An important prerequisite for such research projects is the generation and ongoing maintenance of a highly accurate and stable geometric reference frame over the years. In cooperation with the well estrablished surveyiung company GDV Ingenieurgesellschaft Holst mbH, Lübeck, Germany, in 2009 a geodetic base network was designed and optimized, and implemented with so-called micropiles and special centering constructions. By a network simulation, the expected uncertainty for stations can already be predicted at the design stage of the network. The Figure shows the result after a network optimization:

In the meantime in 4 compaigns this network has been observed, evaluated and analyzed, so that now a coordinate frame in the millimeter range is available and there are also initial statements about the stability of the (up to now) 11 outer pillars. 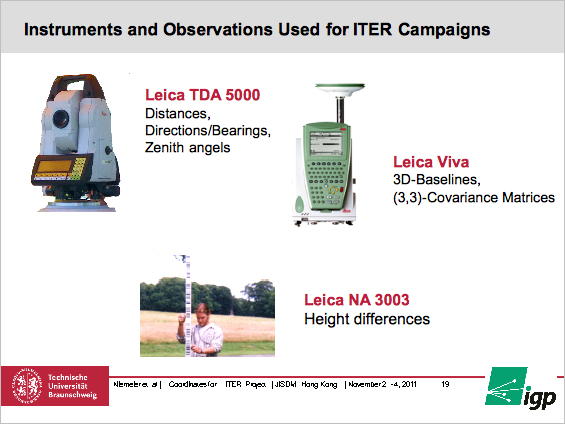 Here the enormous potential of PANDA was applied to combine different geodetic data sets rigorously with each other, i. e. to realize the processing in a common adjustment. The linearized model of this adjustment is shown schematically in the figure: 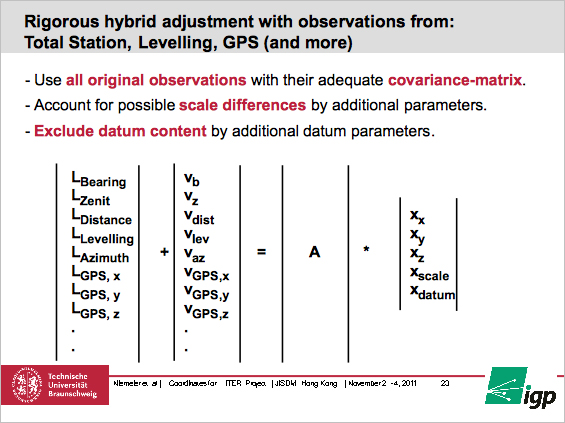 A challenging and responsible project could be – in international competition – realized with the experience of the GEOTEC GmbH. The unique potential of PANDA for processing geodetic networks has significantly contributed to success.